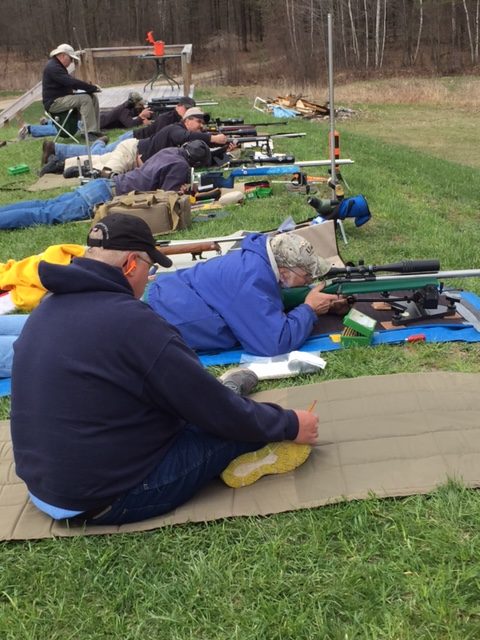 We had eleven (11) shooters arrive for the last of the Winter Mid-Range Prone matches for 2016.  Due to really poor weather on the weekends that we would have liked to have run the matches in March and early April.  We were not able to start until the 16th of April.

In a typical year we get three (3) matches.  This year, only by shooting the 16th, the 23rd, and the 30th of April were we able to complete three.  However, for those matches we at least experienced reasonable weather, just a little chilly.

This match was cut of the same mould.  In the Target Rifle (Any rifle) category, Peter Church continued to demonstrate his sharp eye producing the first 200 of the year (200-14x) in the first stage, and finishing as the high Any Rifle with a 397-21X.  Jake Bondy was a close second with a 397-18X.

We found the importance of ensuring the batteries are charged as two of our targets stopped working during the match.  We will be better prepared next week.

Next Saturday will be the first of the Suburban Mid-Range Matches with a 3 x 600.  Put it on your schedule!

We had fourteen (14) shooters, and utilized four (4) e-Targets for the match. For four (4) relays it took us the better part of four (4) hours to shoot a 2×600. Still faster than if we had done it pulled, but not as fast as if we didn’t spend time fumbling along. However, we are getting better with this equipment. I believe a few more matches and we’ll be the “duty experts” on the Silver Mountain Target software.

Today, in the sling any rifle category, Jake Bondy showed us how to do it with a 398-21X. He was distantly chased by Chris Whitney with a 396-14X. It is notable that there were no cleans even on the “Helen Keller” targets today. A puffy wind with heavy mirage dominated the conditions.

Josh Moore out paced the F-Classers shooting a 393-18X with his F-TR rifle. Notably, John Roethlisberger (apparently no relation to Ben) shot a 392-14X to place second. His was John’s first Mid-Range match. He used John Pierce’s Rifle, and most handily beat John with it. I’ll bet Mr. Pierce makes him buy an action to build his own….

And lastly, Leo Cebula learned that it is smart to tighten the guard screws before shooting a match for the second time in less than 12 months….

In our continuing efforts to show a little local color each match, below is one of Bob Lorenz’s plots for today.

Well, finally we did it. We actually completed a Winter Mid-Range Prone match in 2016. We had only five (5) shooters, but as a group we enjoyed a nice spring day. You never needed gloves, and there wasn’t really much wind.

We installed three targets using the SMT system. Shooting two relays we completed two twenty shot matches by 10:36 after starting at 9:00. In general the electronic target system earned a payment on its cost this morning.

Early in the season, but some decent scores:

The better of Brad’s two plots:

1) The targets represent a different distraction. A shooter is used to glancing into their spotting scope to see the location and value. The scope doesn’t tell anything now. You have to glance at your “device”.
2) You need a device that you can comfortably see. I tried a small one (8*) and a standard sized one. The standard sized won hands down.
3) You need to configure your device to avoid the screen saver from invoking during the string. It is inconvenient to have to unlock the device during a string.
4) If you are planning to shoot the MWP, or the F-class nationals, SMT targets will be used. You need to learn how to deal with the device and the targets before you head to Lodi.

The 2016 Snow Country Shoot-Off was conducted on April 9, 2016 at the Jackson County Sportsman’s Club in Jackson, Michigan.  Mom Nature almost caused a reschedule.  Northern Ohio had upwards of 10″ of snow, Jackson had 3-5″ of snow, and the rest of us had zero to a dusting.  Make for a difficult ride.

However, eight (8) of the ten (10) invitees made it, and we had a good match.  We used Orion targets and machine scored.  There were no challenges, everyone was scored equally tightly.

Kevin Nevius won again with an 1192-86X.  His victory was once again by a significant margin.  The real contest was who would be second and third.  The next three shooters were separated by one point and a few Xs.

Our 2016 competitors and their equipment:

I guess that I should have been suspicious when I ran into the “white out” in Flint in I-75 while driving to the range.  Maybe when it happened again on US 10 driving towards Midland.  I think I should have taken the hint.  Mother Nature doesn’t like me, or the Winter Mid-Range, or the Midland County Sportsman’s Club.

However, we didn’t take the hint.

Didn’t have a lot of shooters (they must have read the weather report better than I did).  But we shot 2 F-classers, and 2 sling shooters.  Neither of the F-classers did enough shots to report a score, but Jake Bondy nailed a 199 with sling, and I did a 148 for 15 shots with sling.

We ultimately had only one target operational.  We are coming to the conclusion that we are doing something wrong.  Moreover, we had a tough time trying theories due to several “white-outs”, where we could not see the targets.

For your chuckles I have some pictures below: