On a nice, but surprisingly windy day over Memorial Day Weekend, the 29th of May 2021 the Michigan Fullbore Rifle Prone Championship was held.  Sixteen hardy competitors fired in winds of 10-20 MPH with sudden gusts. 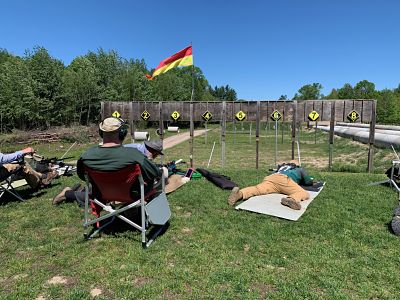 A glimpse of the wind this morning.  Midland County is normally a relatively protected range.  Not so much today.  That flag was pretty consistent, but we suffered from varying gusts throughout the day.

Our State Champions this year are:

After today’s competition the competitors were treated to a Birthday Party luncheon in the block house at the range.  Ray Gross was celebrating his 18th anniversary of his 39th birthday.  Thank you, Nora Kay Folts, Ray’s significant other.

On a Saturday where I was in Arizona (and the temperature hit the low 90’s each day), we had five (5) shooters come out for the first of the Suburban Mid-Range Prone matches for 2021. I would comment on the weather, but seeing how I wasn’t around, I have no clue.  I will admit that it appears that conditions got dicey as the day moved forward.  Many of the stage three (3) scores showed a drop.