On a late October day that could best be described as a one in thousand, we were dry, and almost 70, we had ten (10) shooters, and five (5) Explorers. We used four (4) Silver Mountain Targets and the five explorers as score keepers. Basically, we had a good time, and our targets worked flawlessly.

Based upon a generous contribution from Solomon Diving, and the proceeds of the match, a total of $400 was presented to the members of the Midland Explorer Crew by Ray Gross. 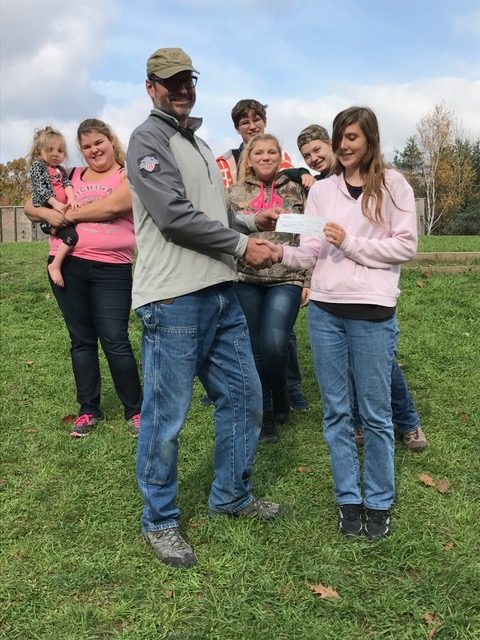 The 6th and final match of the 2016 Mid-Range Prone League was held at the Midland Sportsman’s Club on October 16, 2016.  Six competitors competed in the match, four sling and two F-Class.  The day started  with cool but clear skies in the morning, but got dark and felt like it was doing to rain during match 3. Every now and then a little wind would come through that could give you a wide 10.

Peter Church continues to amaze with another 599.  This one with 37X.  He was the high Any Rifle shooter.  Mike Quillinan, firing a scoped service rifle posted a 593-23X for the high service rifle category shooter.

Bob Lorenz fired a 595-30 with a “mid-range tactical rifle” for high F-Class.

Note that on October 29th we will be running our annual Halloween BSA Charity Match.  This year with the electronic targets we will be using members of the Midland Explorer Crew to keep score.  A portion of the match proceeds will be donated to the Crew, as well as a major donation from Solomon Diving.  The program is available at the following link:

Come on out.  Past experience is only about 10% of these matches has really sucky weather.  The other 90% are just Michigan fall days, which as a rule are decent, but cool.