On Saturday, September 2, 2017 the 2017 Michigan Mid-Range Prone Championship was conducted at the Midland County Sportsman’s Club (MCSC).  We saw a day where the temperature went from 38 degrees F to the low 70’s and mostly sunny.  The result was twenty-seven (27) competitors, which may be the highest turn-out for a MCSC match, and the longest day I can remember.

For that we had some degree of drama, both from the competitors chasing state championships, and from electronic targets that chose to be fickle on the low end of the line.  The target issues were resolved at 500, but then cropped up again in spades at 600 yards.  We finally re-squadded shooters from target one to other targets to complete the 600 yard stage of the championship.

In the Any Rifle category (Sling Shooters), we saw Peter Church and Bob Steketee separated by X’s moving back to the 600 yard line.  When the dust settled Peter finished with a perfect score 600 with 40 X’s, besting Bob’s 599 with 37 X’s.

There was another performance by a sling shooter of note.  Jamie Root, fired a 200 with 18 X’s.  If you are an old guy (like me), you can remember when the National Record for twenty shots at 600 yards was 200-18 for about a hundred years (I exaggerate only a little, it was the record for a long time).

We were pleased to see four (4) Juniors competing in today’s match.  They finished as follows:

This completed our last registered match for the year.  However, we have a couple more league matches for 2017 and two-three “special matches” left for the year.  Our next league match in on September 23, 2017 followed on October 14, 2017 by the last league match for 2017.  Both will be a 3x600s.  For special matches we have our Halloween BSA Charity Shoot tentatively on October 26, 2017, then our Annual Foul Weather on November 25, 2017, and lastly the New Year’s Eve Match on December 31, 2017 (we occasionally actually have this one…).  Be sure to check the events tab on this site for information about the upcoming matches.

On a day with a delayed start due to the heaviest fog I’ve see in the past five years twenty-two (22) competitors produced at least three National Records (still need to review all of the scores), and named two State Champions.  After the fog cleared we were met with clouds that opened to intermittently sunny moments.  When those occurred it was simply Africa hot.  The heat coupled with the humidity made for a miserable day for competing wearing a shooting jacket, but pleasant to be scoring in a T-shirt and shorts.

In the Any Rifle category, John Luitinik repeated his performance in the Michigan Fullbore Championship by producing a 595-38X to best Pete Church’s 595-31X.  Notably, Pete’s 77th birthday was a couple of days prior.  Pete is still impressing us.

The 2015 Michigan Fullbore Rifle Championship was shot on a day that started with frost warnings, but ended in an absolutely gorgeous Michigan spring day.  The winds were gentle.  Just enough to keep the barrel mirage from disturbing your aim, but not enough to disrupt the path of the bullet to the target.

In the Target Rifle aggregate, the winner and state champion was decided between seven (7) shooters separated by one point (446-447).  Ultimately, Kevin Nevius from Ohio (the state to our south, you know:  You are now entering Ohio, turn your watch back 25 years, that Ohio).  Kevin, a two time national smallbore prone champion posted a 447-25X besting the other three 447s and both 446s.  For resident state champion, two shooters produced 447-23X (John Luitink, and Peter Church).  Their tie was broken by 15.4b(1), as such John Luitink is named the Michigan Fullbore Rifle Champion (TR) for 2015.

In F-TR, Bill Litz posted a 446-21X to become the Michigan Fullbore Rifle Champion (F-TR) for 2015.  There were insufficient entries in F-Open to provide an award. 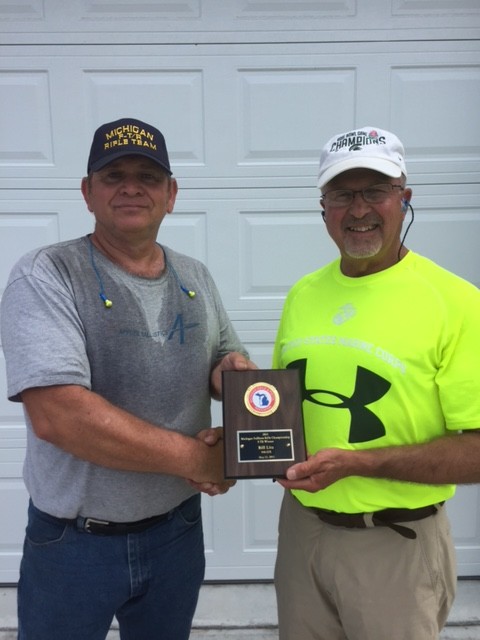